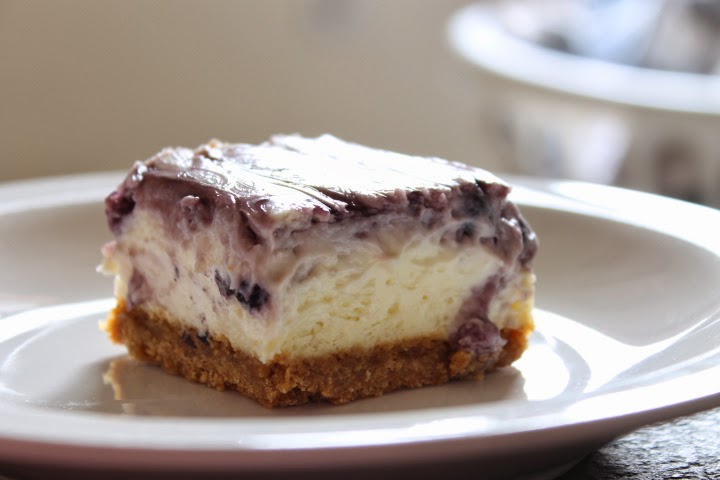 When we have Holiday dinners at my Husband's Grandparent's house, I'm always asked to bring dessert.  I love it because I can try out new recipes and can always get some great feedback. Not to mention, it takes the guesswork out of wondering what to bring to a family gathering.

I knew I wanted to bring a cheesecake because I had a lot of cream cheese in the refrigerator. I have never made a cheesecake before which shocks me now that I think of it.

This recipe was so easy to make and it received great feedback! We came home with about 3/4 of the pan left so I sent most all of it to work with Matt. One of his coworkers shared some with his Wife when he got home and his Wife questioned where he stopped after work to pick up some cheesecake.

The only thing that I would change is that I baked the crust before putting the cheesecake filling layer in. After thinking about it, I probably didn't have to and that's probably why the crust separated a little bit from the cheesecake layer when you would cut into it with your fork. I think if you only baked the crust the one time once you had the filling poured on top, it would be much better. 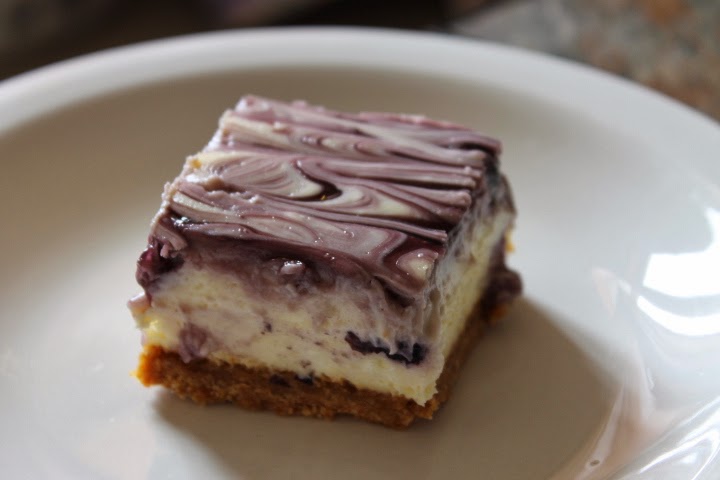 Directions for the crust:
1. Mix together the crumbs, sugar and butter until well blended. Press mixture into 9x13 pan.**
2. Bake at 375 for 7 minutes.

**{If you're using this crust in a recipe that calls for the finished product to be baked, you could probably hold off on baking the crust separately. If you're making a pudding pie or something that does not need to be baked, you probably will want to follow step 2.}

Directions for the cheesecake layer:
1. Mix the cream cheese, sugar and lemon extract until smooth.
2. Add the eggs and beat until just combined.
3. Pour into the graham cracker crust
4. Drop blueberry pie filling onto cheesecake layer by tablespoons.
5. Using a butter knife, swirl the filling throughout the cheesecake layer. Dropping more filling as needed.
6. Bake at 350 for 35 minutes or until center is almost set.
7. Cool on a wire rack for 1 hour and then refrigerator for at least 2 hours.
8. Top with remaining pie filling, if desired at the time of serving.
at 5:54 PM

Check out these cooking blogs!